A number of people in the European Union lack access to modern energy services like electricity and heating. While so-called energy poverty is primarily a social issue, it has environmental consequences as well – for instance, the use of waste and tyres for heating produces CO2 emissions and worsens air quality. It is also a phenomenon that particularly affects municipalities in Central and Eastern Europe. 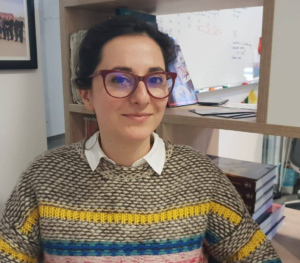 Andreea Vornicu of the Center for the Study of Democracy.

A research team from Romania’s Center for the Study of Democracy (CSD) is investigating this issue to gain a better understanding of, and to eventually reduce, energy poverty. The research focuses primarily on mapping energy poverty in Cluj-Napoca. This medium-sized city in north-western Romania is considered to be wealthy, yet many of its inhabitants cannot afford basic services.

Andreea Vornicu-Chira is a member of the CSD research team. At the Catalysing European Local Climate Action conference, held in May 2019 and organised by the European Climate Initiative’s (EUKI) Bridging European and Local Climate Action (BEACON) project, she shared her findings with mayors and local authority representatives from across Europe. In this interview, she explains her research interest and details what other cities and municipalities can learn from the example of Cluj-Napoca.

Have you had any personal experiences of energy poverty? How did you become interested in the issue?

Initially, energy poverty was not my major research interest. However, when I joined the team at the Center for the Study of Democracy I found it extremely interesting to discuss this issue with people and to analyse data and see how various aspects of energy poverty are relevant. Energy poverty has various layers such as a legislative layer, a policy layer, an administrative layer and the NGOs’ perspective. Eventually, I got interested in the human dimension and how municipalities and local actors interact with people and how the phenomenon of energy poverty is produced and reproduced in communities. That is why I joined the research project and continue exploring this theme. 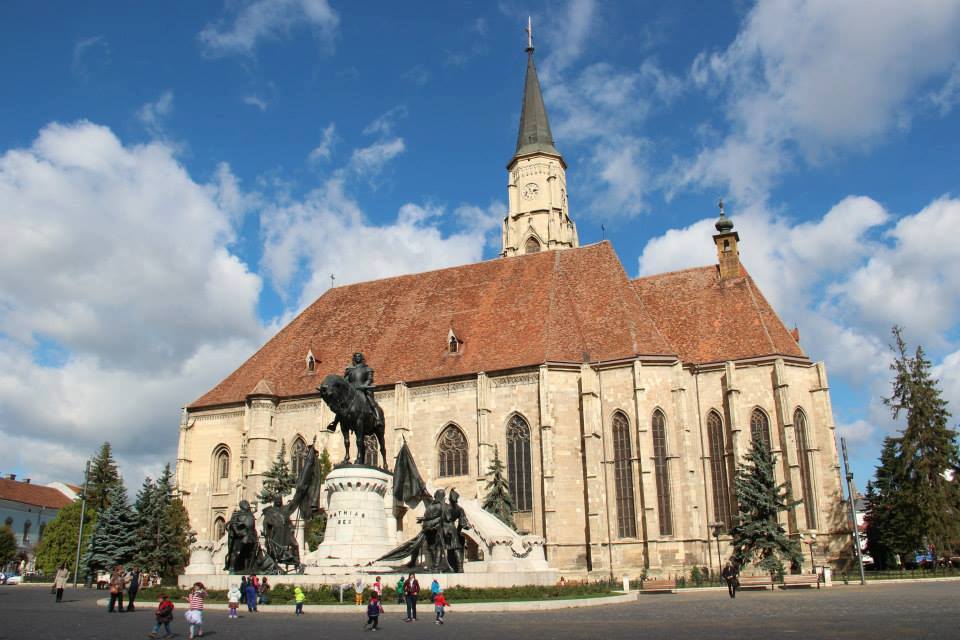 Cluj-Napoca is considered to be wealthy, yet many of its inhabitants cannot afford basic services. Poto: Andreea Vornicu

Your research focuses on Cluj-Napoca in Romania. What are the challenges in this city?

There is not only one challenge; rather, there are various problems that contribute to the phenomenon of energy poverty in the city. Firstly, there are segregated communities. People with low incomes live mainly in peripheral urban areas and not necessarily in the city. The people here comprise some of city’s most disadvantaged citizens: they live in a geographical space that is segregated, lack access to utilities and to energy, and must find their own heating solutions and ways to electrify their households. Although Cluj-Napoca is considered one of the wealthiest cities in Romania, it is also an unequal city – and this inequality is rising. Many people are becoming poorer and are moving to the margins of the city. In addition, certain of the city’s inhabitants are faced with energy poverty. And we, at the CSD, want to explore various aspects of energy poverty. 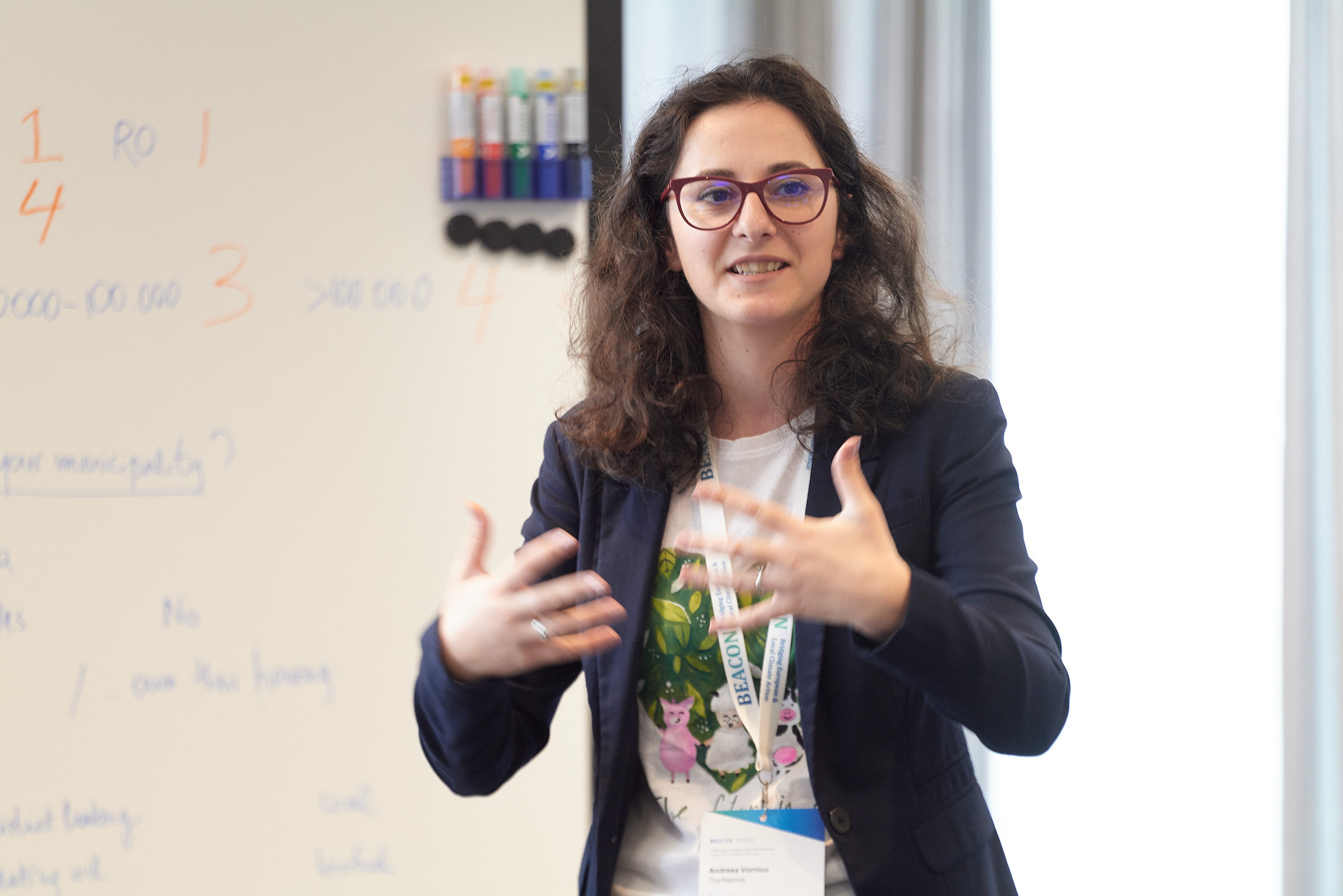 Andreea Vornicu spoke to local representatives during the conference of the EUKI project BEACON. Photo: adelphi

Energy poverty is not only a social issue. What are the consequences of this phenomenon for the environment and for CO2 emissions?

Indeed. Energy poverty and the environment are related. Usually, people who cannot afford to pay bills or to live in regular housing use various approaches and fuels for heating, and this is not always gas. Many of them use wood and some might use waste from nearby rubbish dumps. The burning of waste and wood increases pollution, so much so that housing in residential areas is one of the largest polluters. It is this dimension that we are trying to understand. We want to map buildings in Cluj-Napoca. We want to see how the buildings from the communist era and post-communist era contribute to this pollution, how people conduct their lives in the city’s different kinds of housing, what their incomes are, whether they have access to social benefits and whether they are exposed to energy poverty. Therefore, we are not only concentrating on the extremely marginalised people of Cluj-Napoca, but are also trying to tackle the phenomenon of energy poverty from various angles and to better understand the vulnerable consumer.

The good news is that the city of Cluj-Napoca has an energy efficiency department and an energy auditor. The municipality has started monitoring data on the consumption patterns of local authority properties. This includes schools and hospitals – basically all buildings used by the authority.

At present, the Center for the Study of Democracy is developing a strategy to be included in the city strategy on energy efficiency and energy poverty. Basically, we have been working to map energy poverty in the city in terms of housing, materials used for building houses and apartment units, social benefits, and incomes. 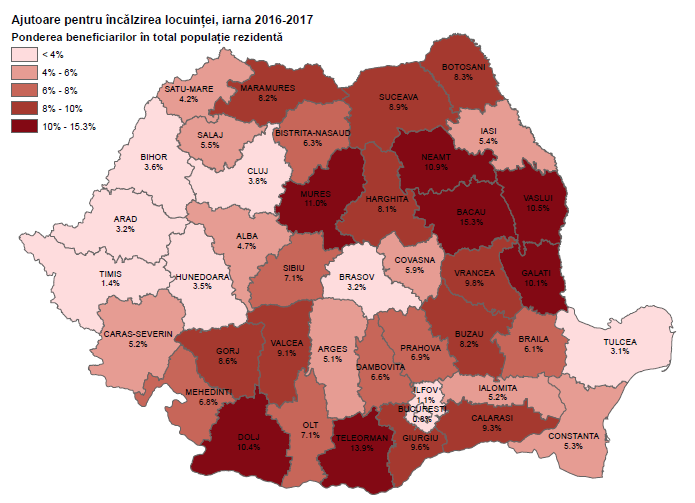 Share of heating benefit recipients in the total population of the Romanian counties in 2016 and 2017. Source: democracycenter.ro

What is your personal objective for the research project? What would you like to achieve?

I really want to bring all the relevant stakeholders together and to open up the discussions regarding energy poverty. Basically, I would like to bring energy suppliers, NGOs, academia and local authorities together to develop our understanding of the issue and to find common solutions for those in need.

What three things can other municipalities learn from the city of Cluj-Napoca?

Its willingness to collect data and to bring policy-makers together and its openness to new technologies. For example, Cluj is investing in electric buses for its public transport and in other smart facilities. The municipality is willing to keep pace with new technologies and invest in energy-efficient infrastructure. Moreover, the municipality is interested in using data to develop policies that respond to citizens’ needs.

CSD Report on energy poverty in Romania and Europe (2017)