These and 24 other municipalities from Portugal and the Czech Republic are participating in the project Bridging European and Local Climate Action (BEACON) supported by the European Climate Initiative (EUKI) of the Federal Environment Ministry. 55 schools from Romania, Bulgaria, the Czech Republic and Germany are starting their cooperation projects at the same time. Exchanging experiences on effective climate measures and sensitisation to climate action issues in schools will be at the forefront of their work.

Municipalities and municipal actors are pioneers and drivers of decarbonisation and social transformation processes. They therefore play a key role in achieving medium- and long-term EU climate targets. The BEACON project is tapping this potential by networking ambitious German municipalities with European partners thereby promoting an exchange of experiences on climate action. The goal is to make the benefits of climate action projects in Central, Eastern and Southern Europe tangible and to encourage others to follow suit by disseminating good practices in a publicly visible manner. This bilateral and multilateral cooperation is not exclusively about technical cooperation; the personal exchanges and different perspectives in the field of climate action help improve integration and understanding in Europe. 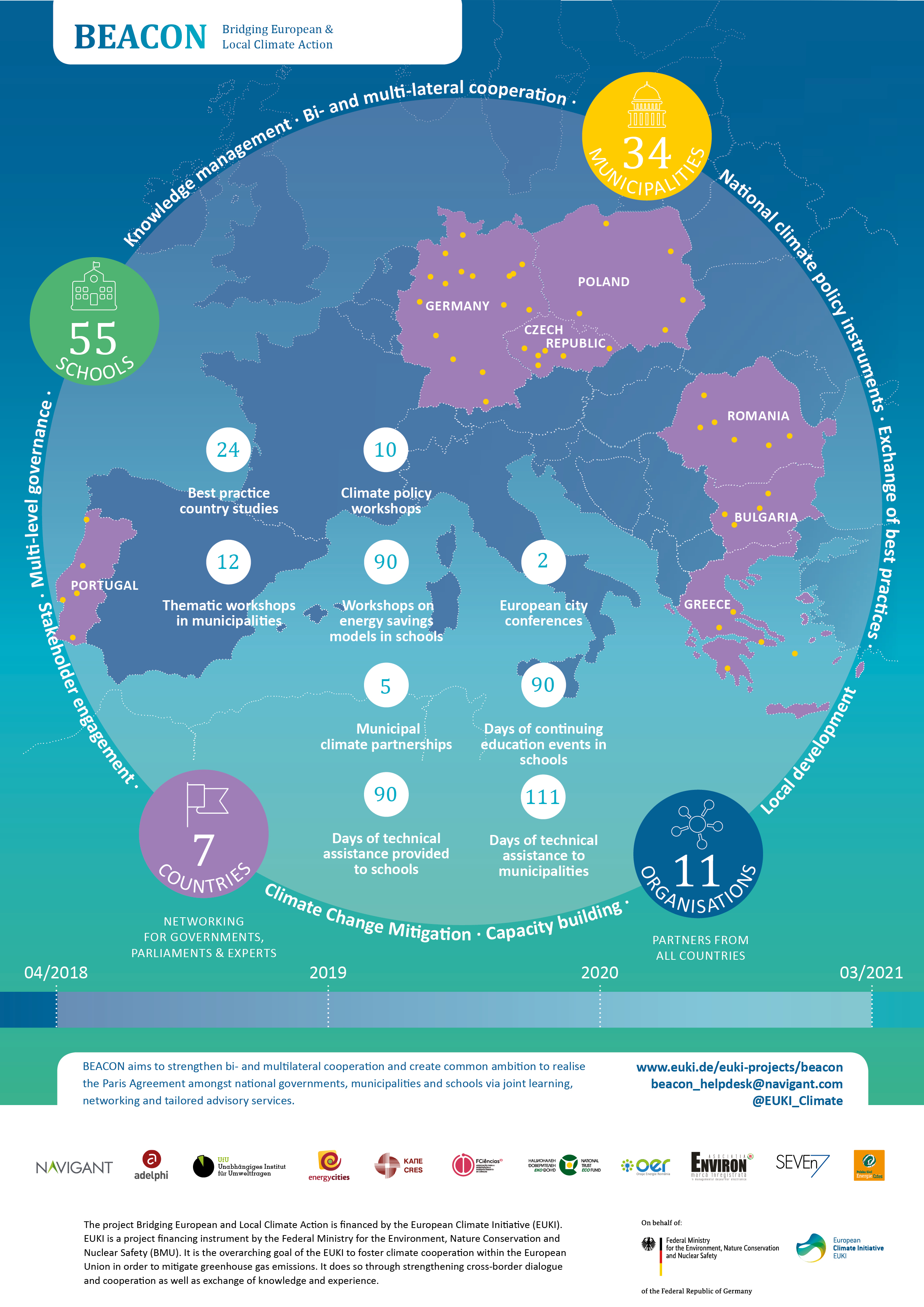 The project BEACON is active in 7 countries, 55 schools and 34 towns and municipalities.

Partnerships amoung municipalities and schools

Among the selected urban climate partnerships are three German-Polish partnerships (Ritterhude and Sztum, Rosbach von der Höhe and Ciechanowiec, Schwäbisch Hall and Zamość), one German-Romanian partnership (Arnsberg and Alba Iulia) and one German-Greek partnership (Bottrop and Agios Dimitrios). All participating municipalities will come together at two European Climate Conferences (probably 2019 and 2021) to present their local commitment and to network.

Another focus of the BEACON project is the involvement and further education of the coming generations in a total of 10 German schools and 45 schools across Romania, Bulgaria and the Czech Republic. Pupils will deal with climate action and energy efficiency measures early on and exchange experiences with their partner schools in other countries. To this end, the savings potential of the school buildings will be analysed, and all those working and learning in the building will be further educated on the subject and involved in implementing corresponding measures. Schools involved from Germany include schools in Eberswalde, Halle, Potsdam, Hanover and Arnsberg.

It has already been shown by a predecessor project that European municipal cooperation delivers concrete results. The predecessor project gave rise to one of many successful measures on air pollution control in cities, namely on the expansion of inner-city cycle paths in the partner municipalities of Rosbach and Ciechanowiec. This measure was developed in the context of a German-Polish cooperation project supported by the Federal Environment Agency (UBA) and the BMU. The successful practice employed in these municipalities of communicating expertise in regional workshops will be continued in the BEACON project.