The Estonian Fund for Nature (ELF), the Estonian Green Movement (ERL) and the Estonian Environmental Law Centre (EELC) submitted a citizen initiative in support of climate neutral Estonia by 2035 [1], to the Prime Minister Mr Jüri Ratas this Monday. They call the Minister and the government to take more ambitious action to fight climate change, using science-based and fair solutions engaging the entire society. The initiative received nearly 3,000 signatures and was joined by 12 organisations [2], including the aforementioned initiators.

During the meeting with the Prime Minister, NGOs pointed out that the climate crisis is not leaving us but gains momentum instead. Similarly, there is no escape from the increasing pressure exerted by the international climate policy and climate movements. As the climate crisis affects many walks of life, the state should involve scientists from all of Estonia’s major universities to find cross-sectoral climate-friendly solutions. 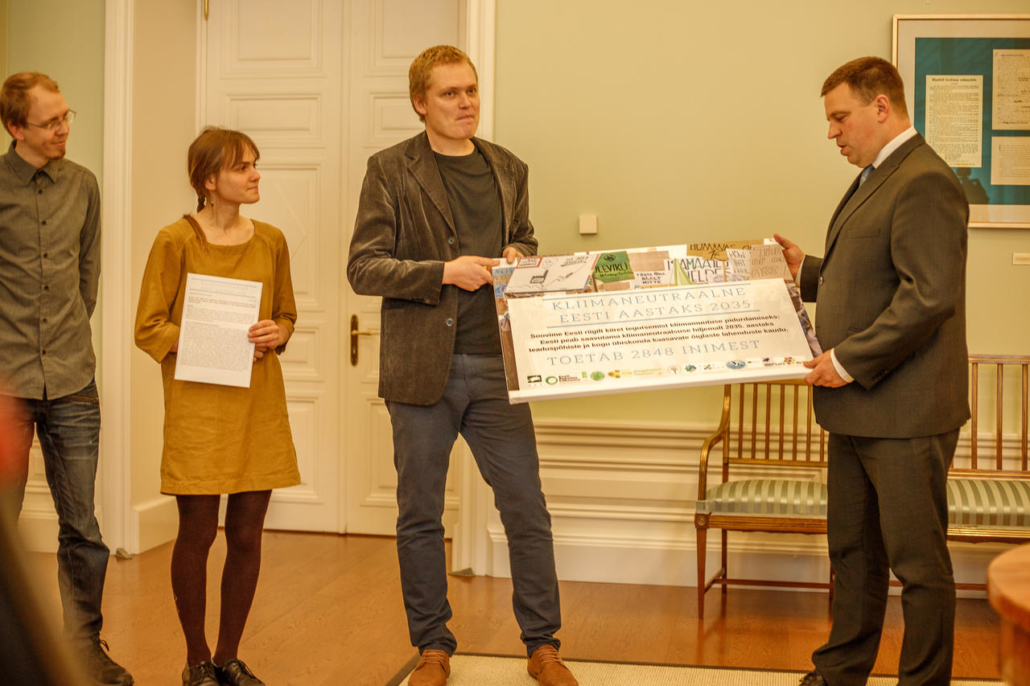 The NGOs highlighted that Estonia could take a big step towards climate neutrality [3] now by implementing the just transition model [4] used in various places in Europe. Among other things, just transition means that people affected by the transition are ensured fair income and future prospects.

“Today, Estonia stands at the crossroads,” said Siim Kuresoo, Deputy Chairman of the Management Board of Estonian Fund for Nature. “Should we continue to sustain a polluting industry for decades by establishing new oil plants and burning wood and oil shale at low efficiency or choose a path of development based on climate-friendly renewable energy sources with the help of the European Union. In the first case, Estonia will continue to lag behind in terms of climate policy, whilst the second option allows us to assume the role of innovative trailblazer.”

The initiative was handed over to Prime Minister Mr Jüri Ratas at the Government Office of Estonia [5] before the session of the government’s Climate and Energy Committee.

[1] Citizen initiative “Climate neutral Estonia by 2035”. According to the law, Estonian Parliament is obliged to have a discussion over citizen initiatives that have gathered at least 1000 signatures.

[3] Climate neutrality means that a country does not emit more greenhouse gases to the atmosphere than it absorbs.

[4] Just Transition brings all actors who believe in fair regional redevelopment to the same table: unions, industry, public administration, governments, civil society and others sharing this goal. They should be working together to find what is best for their regions and communities, from creating good quality jobs to identifying sustainable alternatives. Blogpost by Bankwatch experts who were visiting Estonia at the end of September 2019:

[5] Photos of the meeting with the Estonian Prime Minister Mr Jüri Ratas by Katre Liiv.

EU Energy Performance of Buildings Directive: Guidance for public officers now...
By using this website, you consent to its use of cookies. Data privacy statementOK
Scroll to top