Important day for the growing community energy movement in Greece

3 December 2020 – For the first time ever, energy communities from all over Greece gathered online to discuss their current projects and project development plans, as well as the challenges they face in realising their vision for a clean, just and democratic energy transition. Around 383 people from all over Greece, from Corfu to Halki and from Evros to Crete, exchanged ideas for more than 2,5 hours demonstrating the great interest in the topic of community energy. 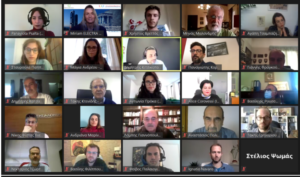 In addition to REScoop.eu (the European federation of citizen energy cooperatives) and some of its established and new members, also several academic institutions, civil society organizations such as Greenpeace, WWF and the GreenTank, as well as representatives of local and national authorities joined the discussion. The Director general for energy from the Greek Ministry of Energy and Environment was present as well. Furthermore, the event was attended by a member of the European Parliament, representatives of IPTO (the Greek Power Transmission System Operator), HEDNO (the Greek Distribution System Operator), CRES (the Centre of Renewable Energy Sources in Greece), together with many interested citizens, and various companies from the renewable energy sector.

Speeding up the energy transition in a socially fair manner

The meeting revealed the emergence of an authentic community energy movement in Greece, which has the vision and drive to transform the energy system in accordance with the principles of energy democracy, solidarity and sustainability.

The event was organised in the framework of the European Citizen Energy Academy (EUCENA) by Electra Energy Cooperative (REScoop.eu member) and the Institute INZEB with the support of REScoop.eu and Greenpeace Greece.

EUCENA is a new European project, coordinated by REScoop.eu, that focuses on the development of citizen energy communities in Southeast Europe, together with the diversification of existing citizen energy initiatives across Europe (with a specific focus on involving more women), the creation of new business models and the realisation of new projects. EUCENA is supported by the European Climate Initiative (EUKI) of the German Federal Ministry for the Environment, Nature Conservation and Nuclear Safety (BMU).

The main purpose of this meeting was to raise awareness about community energy and facilitate a first contact between the Greek energy communities, along with an initial inventory of the main concerns and interests that will be at the centre of future discussions. The event initiated a dialogue on Energy Democracy, which will continue and hopefully produce many tangible results for the development of the community energy sector in Greece.

The discussion started with a presentation on the emerging Community energy sector in Greece, as mapped out by an initial study carried out by REScoop.eu member Electra energy cooperative and the Smart Rue research lab (National Technological University of Athens) for Greenpeace Greece (link).

Some statics of energy communities in Greece

According to the study, there are more than 409 energy communities, most of which are situated on the mainland.

The research results show that most energy communities in Greece opt for solar energy, with fewer initiatives focusing on wind energy or biomass. 84% of respondents say that their energy community would like to get involved in the local community and provide economic support, create employment, and also help with the transition towards 100% renewables through, for instance, awareness-raising and/or education campaigns and events on energy autonomy.

Moreover, about 25% of the initiatives plan to support vulnerable energy consumers in their communities. Unfortunately, emerging initiatives lack gender balance; 42% of them do not have women on their board of directors.

Finally, about 90% of the initiatives support the idea of establishing a Greek Community Energy federation that focuses on knowledge exchange, capacity building, networking, representation and advocacy for the development of the field.

The event promoted a discussion on financing and technical aspects, policy issues related to energy communities, and gender-balance issues in the Greek (community) energy sector. Particular attention was paid to the institutional framework, which is changing and will continue to change after the transposition of the European Directives. A lot of uncertainty remains about community energy instruments, such as virtual net metering. With most Greeks living in bloks of buidings, it is important that energy communities keep their rights to participate in, and benefit from, the activity of collective virtual net metering.

This online gathering was only the first of many that will be planned around the community energy movement in Greece. This is the moment for the Greek energy communities to learn from each other, and from other like-minded pioneers and experts in Europe. It is also the time for the movement to organise, coordinate and develop its strategy. By joining forces with other more experienced energy communities in Greece and Europe, the Greek community energy movement can influence policy, grow and flourish.

Responsible for the content of this page is Antonia Proka, REScoop.eu. Contet uploaded by EUKI

Successful national conference in the frame of Our Buildings and Energy Efficiency...

© BEACON Fostering Local Climate Action Finance through Vertical Collaboration
By using this website, you consent to its use of cookies. Data privacy statementOK
Scroll to top