Congratulations to the winners of the Three4Climate school contest

What would you need to feel comfortable in your future city? Would you plant more trees, get rid of cars, or ride your bike everywhere? Should everyone plant their own vegetables? In short: What is your vision of a climate neutral city, school, country or world in 2050? Students from the Three4Climate schools in Germany, Portugal and Slovenia were invited to come up with creative ideas to answer these questions and take part in a student contest. At the bottom of this article you can find a slide show with screenshots of some of the described contest submissions.

Meret from Bethel Gymnasium in Bielefeld submitted a passionate essay that is an appeal to politicians to listen to scientists who have been warning against the severity of climate change and its consequences. Meret describes how she draws hope for a climate neutral and climate just future from participating in climate strikes organized by Fridays For Future. To her, climate justice means that the countries most responsible for climate change take responsibility because: “Yes, [here] we also notice that the weather is getting more extreme, especially the hotter summers. But the MAPA (most affected people and areas), which have contributed the least to human-made climate change, feel the greatest consequences”. Her vision is a life in solidarity together without racism, classicism, sexism and other forms of oppression. With her essay, she won the first prize at her school. 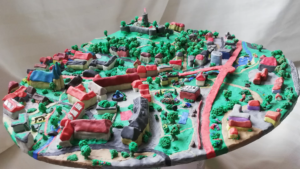 Smilla, Marieke and Linn, the first prize winners from Gymnasium am Waldhof also in Bielefeld used modeling clay to build a model of their dream future. In a video they introduce the characters Lea and Emily who guide viewers through climate neutral Bielefeld of the future. Lea and her neighbours grow vegetables together so they don’t have to go to the supermarket very often and adjust their diets to the seasons. Private cars are completely banned from the city, citizens shop for their clothes in second-hand stores and meat is only sold in one local shop. Emily, now a teacher at the Waldhof Gymnasium looks back at how the climate movement led by figures like Greta Thunberg has sparked revolutionary rethinking in the population, politics and the economy which enabled change.

The winners of the first prize from Loulé’s Escola Sebastiao Teixeira constructed a paper model of “Cidade TAE”. TAE city is the most sustainable city of the future and stands out as a city with many green spaces and with solar panels on all buildings. In the video submitted by the three students, they guide viewers through the city and give examples of what the sustainable lifestyle of its citizens will look like. For example, all the food provided in the school cafeteria will be organic. Further submissions from Loulé included more models of future cities and of sustainable houses.

Raquel, Leonor and Sérgio, the winners of the first prize from Braga’s Agrupamento de Escolas de Celeiros shared their vision of a decarbonized world in a video. According to them, in 2050 cars will no longer exist since everyone will be moving around by walking, cycling, rollerblading and skating. In the future, all school material will be digital to no longer waste paper and other materials. Everything that is sold will need to have a carbon neutrality seal. The industry will also play a central role in decarbonization. Factories will be equipped with mandatory filters and new ways of ecological production will have been discovered. The second and third prize in Braga goes to Salomé and Beatriz who submitted drawings of their visions of a carbon-neutral life in the future.

Ela’s calendar on how to save the planet. Copyright: Ela Bevk

Tea, Rasina and Lea are the first prize winners from Maribor. In a video they compare what life will look like in 2050 “if we take care of our planet” vs. if we don’t. In the optimistic scenario, people can continue drinking clean tap water and spending quality time outdoors with their pets. If nothing changes now, clean water will become scarce, people will have to wear masks when leaving the house because air pollution has become an even more severe health threat. The second prize in Maribor goes to Lora and Melisa who compiled a five-minute video in which they explain the main causes and consequences of human-made climate change. Karla, the winner of the third prize from Maribor, submitted an essay written from the perspective of a young tree whose family and fellow trees have been cut down by foresters and who urges humans to remember that “our common fate is in your hands”.

Ela, Neža and Žiga, the first prize winners from Kranj, created colourful calendars with each month of the year containing drawings of ideas on how to protect the planet. Žiga for example reminds viewers to avoid shooting fireworks for New Years. Neža promotes taking the bus instead of driving in individual cars in the month of May. Ela suggests saving energy by turning off lights during the day in June.

The Three4Climate Team thanks all students from Germany, Portugal and Slovenia who participated in the contest. Congratulations go out to all of you! As current circumstances don’t allow for the students to go on an international train ride, the first prize winners from both schools in each country will instead take the train to meet within their country and enjoy three days of exciting exchange activities and workshops in June. They will also get to present and further work on their contest submissions with each other. A virtual meet-up will give them the opportunity to connect with winners from the other countries. The student trips will of course only take place if national Covid-restrictions allow it. It will be organized by the Independent Institute for Environmental Issues (UfU) and the project partners Faculty of Sciences – University of Lisbon (FCiências.ID) and Energy Agency of Podravje (Energap). To follow the students’ activities and look out for more pictures and insights, the Three4Climate project will share these via the EUKI channels.

The Three4Climate Campus series has taken off

Responsible for the content of this page is Linda Beyschlag / Guidehouse

New Podcasts on “How do Energy Scouts make their companies more sustainable...

Launching Transformative Actions in Priboj, Serbia: “We Have a Deal!”
Scroll to top